The Oldest Cemetery in Central America 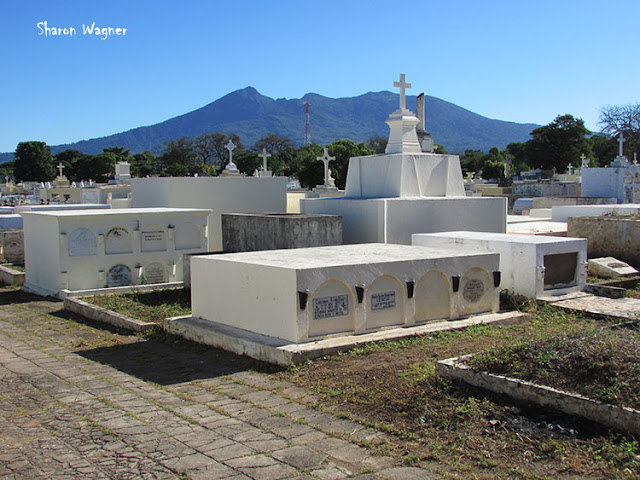 The Granada, Nicaragua Cemetery just might be the oldest in Central America. That's a lot of ghosts. Colorful and Colonial Granada was established in 1524. The city is awash with painted architecture, grand churches and history. This white washed cemetery certainly was grand with its ornate granite carvings, grand mausoleums and cows. Yes cows! Nine Nicaraguan presidents are buried here. And beautiful volcan Mombachu looms in the distance. We entered during a hot and fiery afternoon. The white mausoleums resting against a deep blue sky looked absolutely Grecian. Simply striking. But, we were melting. Next time we visit, we'll go when the sun isn't so harsh. 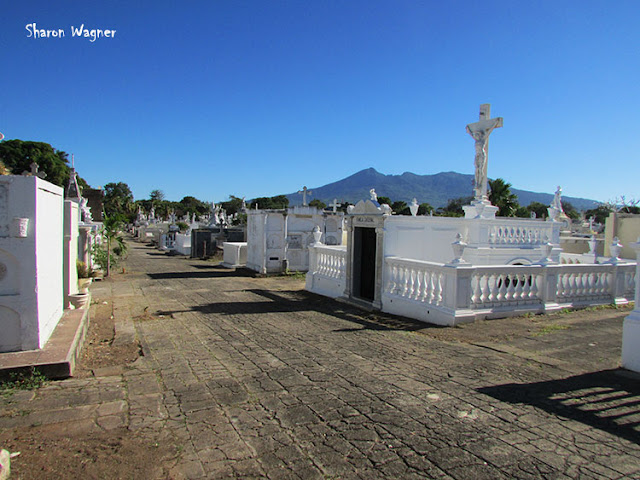 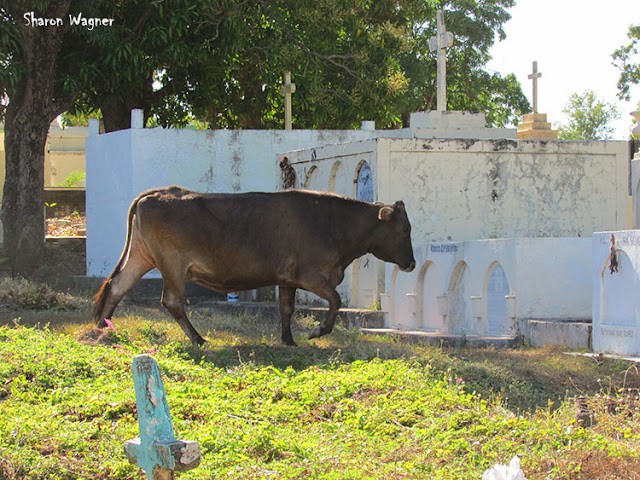 Cows! I love it. Only in Central America. 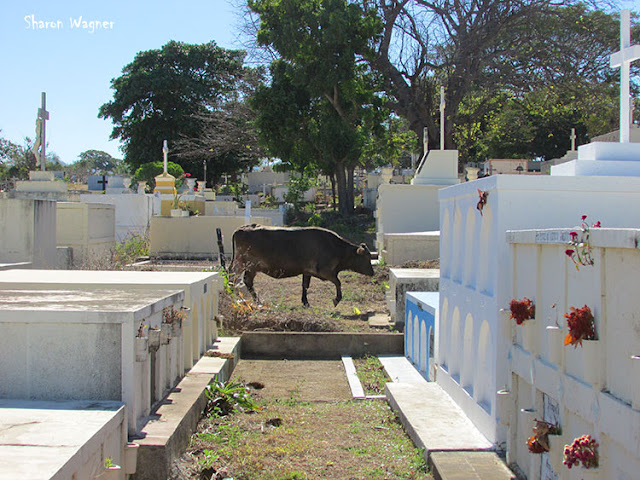 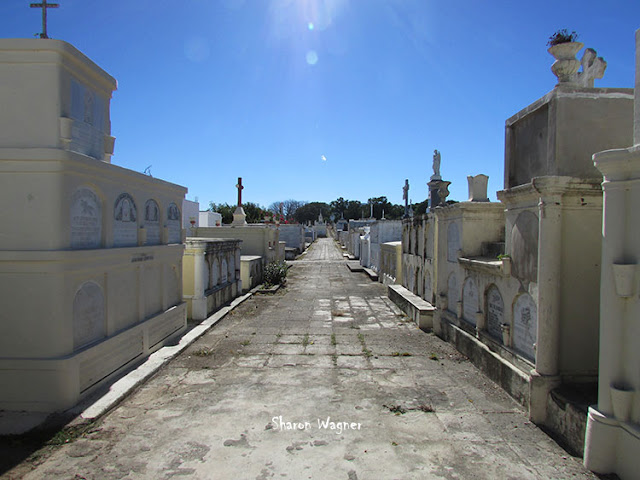 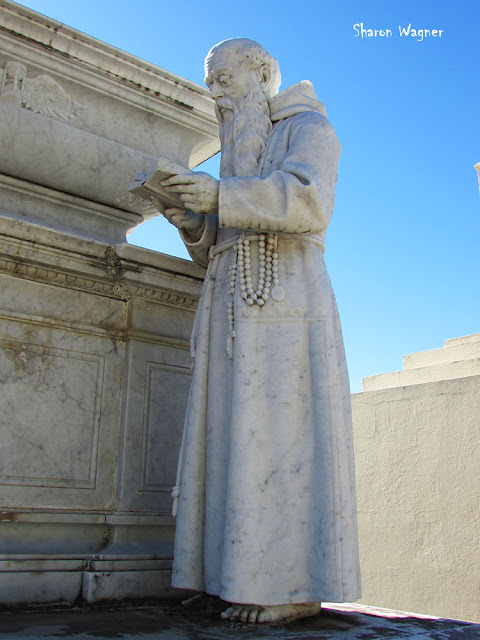 I read that most mausoleums have basements built underground. Housing more of the dead. But, I didn't take a subterranean gander. 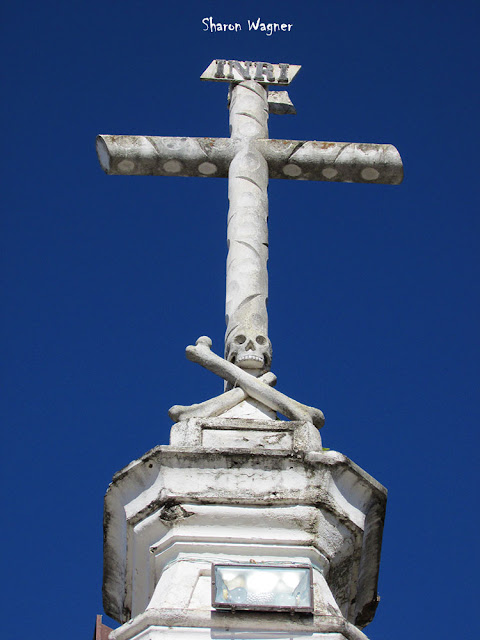 As soon as we entered we were trailed by a sad hustler. Actually, he just followed us, mumbling, inaudibly, about the different tombstones. But, luckily, there was a funeral going on and living security guards roaming on foot. So he left to stalk some other tourist. Or ghost.

I've always been fascinated by cemeteries. I don't know why. Maybe it is because of the fine line between the living and the dead...

Did I mention the dead? Hide the crayolas! Halloween month comes to a grisly and ghostly end.... 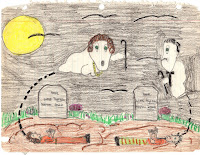 Over at my other blog, The Chorus of the Crows

I'll be back in December!

Posted by Sharon Wagner at 8:21 AM

Email ThisBlogThis!Share to TwitterShare to FacebookShare to Pinterest
Labels: Nicaragua

Safe travels Sharon .... enjoy the subtropics! That cemetery doesn't look at all haunted to me.... too beautiful against the blue blue sky and the cow looks like she is on a mission to visit a certain grave.

Have a good time :) Beautiful photos,not creepy by day but I wouldn't stay there by night all alone. HAPPY HALLOWEEN :)

Amazing place. Have a great time!
~

This cemetery has the beautiful background of a volcano, but the monuments and mausoleums look grand and heavy, and the cows inappropriate to a resting place for human beings.I suppose the people of Granada city like grandeur and are proud of their cemetery.

It looks beautiful and not hot at all, in the pictures. I love the monk, and the white stone against the blue blue sky. :-)

What a beautiful cemetery. I would love to visit there.

Gosh ,, that cow was walking through there!
love
tweedles

As cements rues go, that looks a lovely nor. Enjoy your trip.

Beautiful and very different from our cemeteries.

Great photos. While I was looking at them I started thinking that maybe there's fewer ghosts in an old cemetary than in a new one? Though maybe they stick around for the cows.

Nice pictures. The ages of things built by Europeans always seem so important that we forget that people lived in these places for hundreds (if not thousands) of years before. Just saying!

Really fascinating cemetery .
Do you really mean there are lots of ghosts.

I don't think so .
Such calm places sometimes various kinds of thoughts.
Few enjoy their historic vision. Some feel thrilled by ghostly stories and very few hear the call of place

Very interesting! Bright sun and all that white make for difficult photos. You seemed to have not problems though. Very nice shots...

Beautiful cemetery! Reminds me so much of the one in New Orleans! Except for the cows. :-) So, you are taking a break....as have I of course. I did see your book review. I was so sad that I was the ONLY comment Mom got on her review right before yours! Good grief! I don't know why people aren't participating more! I will go by and visit Chorus of the Crows when I sit down to the blogs again. Just not spending much time here right now. Less than two weeks to go! Going a little crazy!!!! :-)

cemeteries are place where visiting is so fascinating for me .
after the all useless rat race one goes to rest here leaving everything behind inevitably .
thank you for sharing this peaceful resting place .
really marvelous 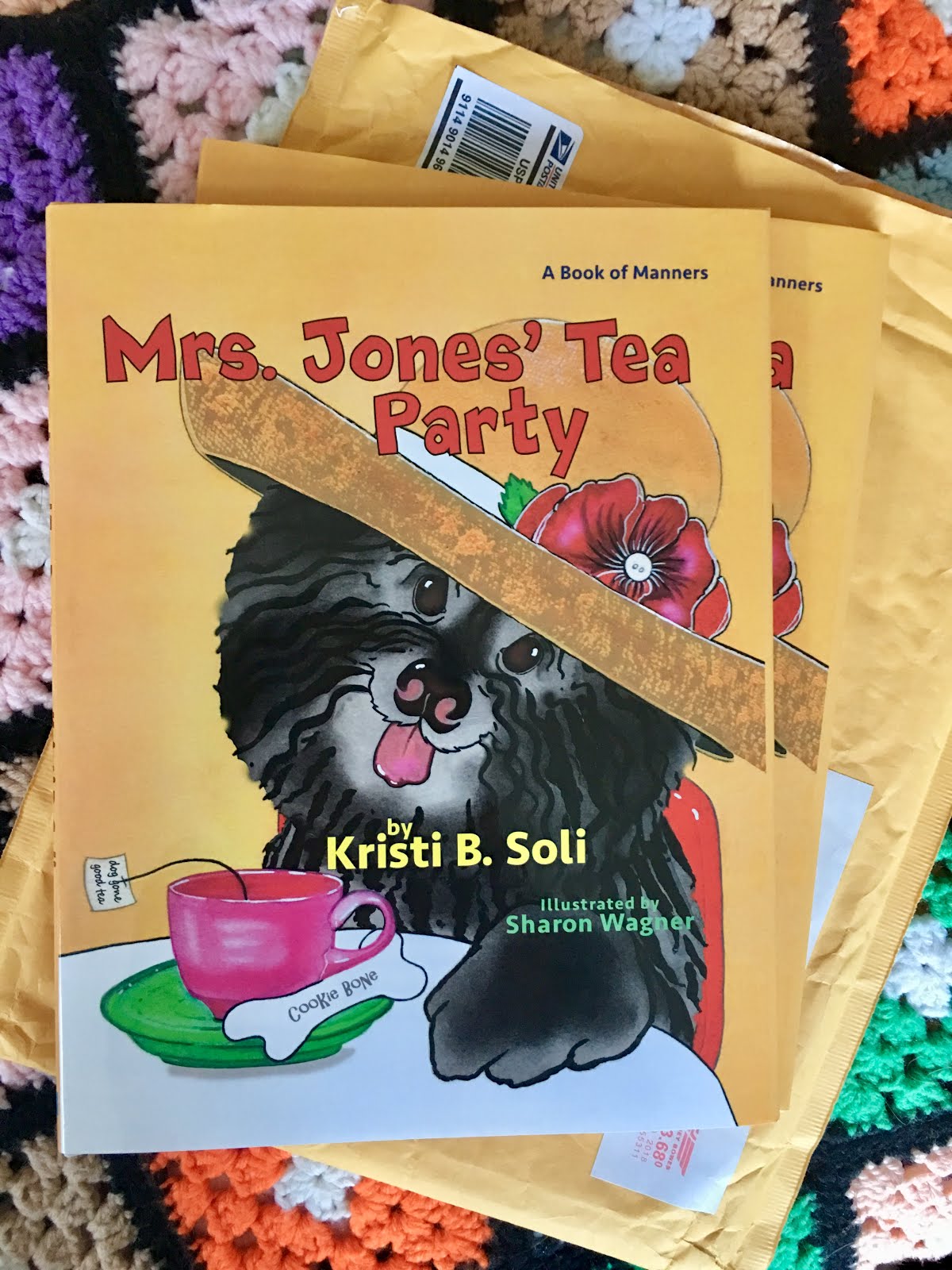 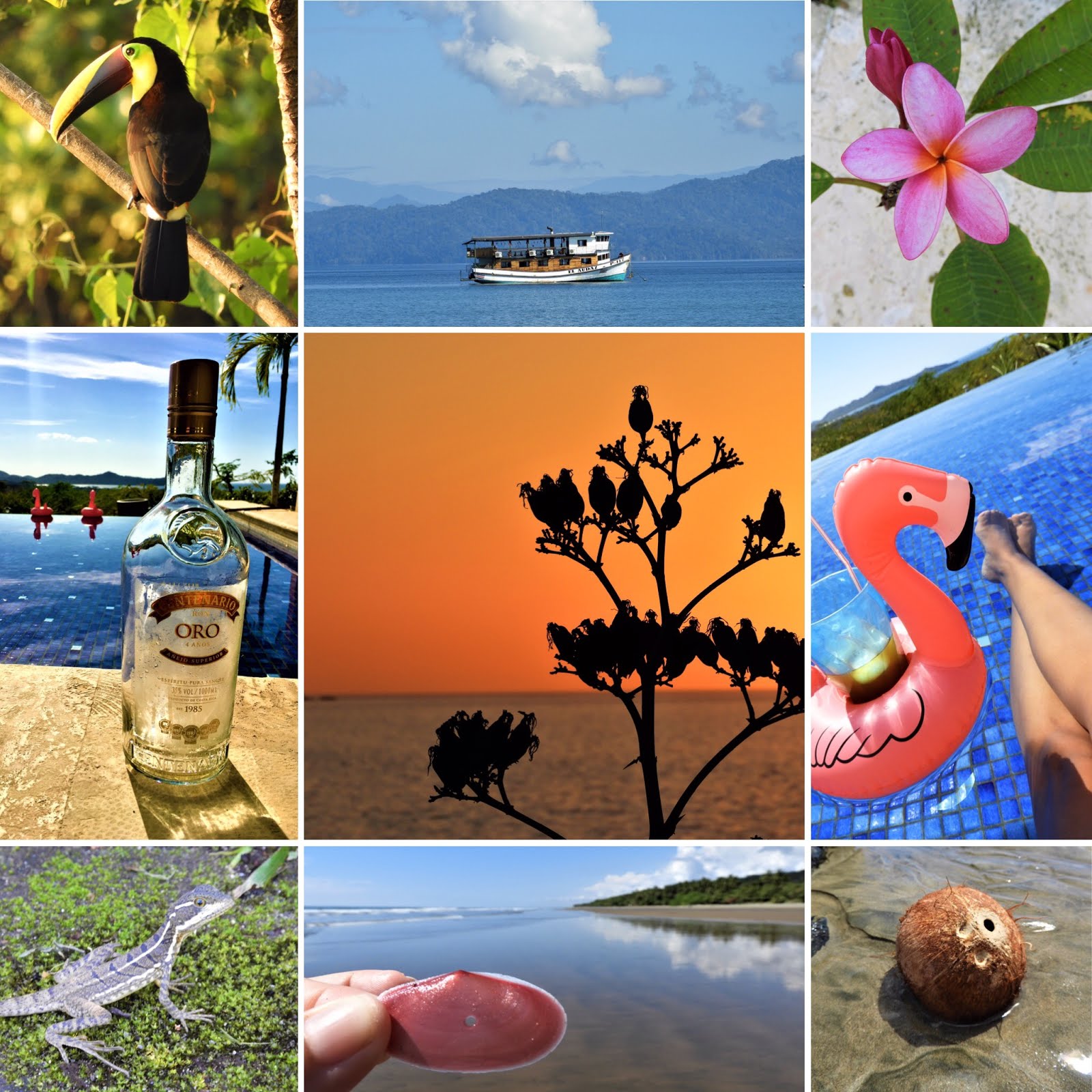